It has been way too long since I have updated this site. There are several reasons to that but those are not my talking points today. 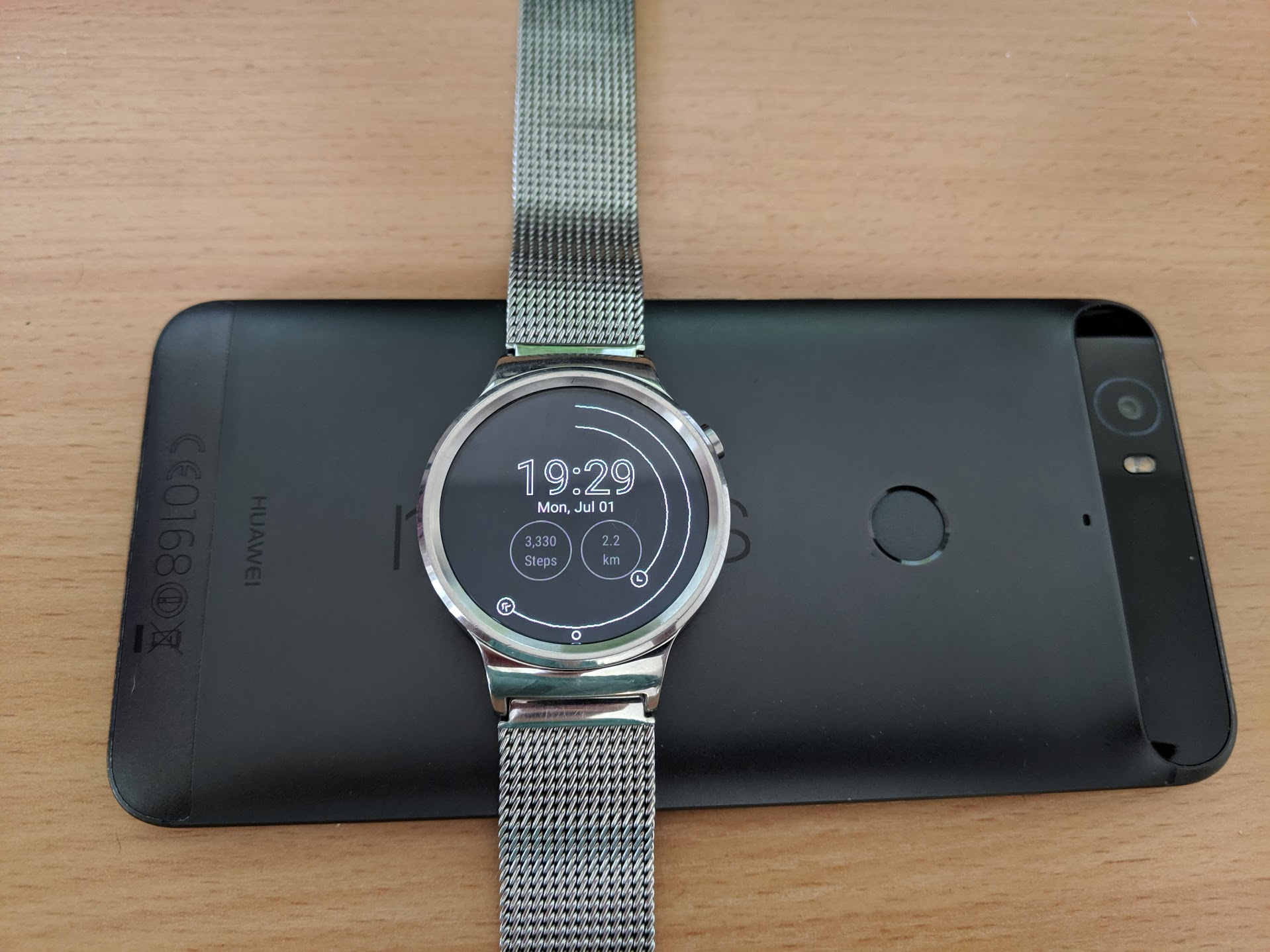 Getting stuck in old technology is easy. All you need is way too good tech that you don’t want to get rid of.

I have pretty much always been an early adopter. I was very early with my Nexus 10 purchase and I’ve used a WearOS Watch since the first Huawei Watch came available. Since then however, I have slowed down with my upgrades to a point that I feel like I’m Google, coming a generation behind.

The fact that I’m using a Google phone is not helping. The Pixel 3 XL that’s my main smartphone, was a generation behind the trends with it’s huge notch and single camera. Still I got one. Am I getting old?

Last year, I bought a Note9 and I kind of liked it at first. Although, after a while, I started to feel the worse sides of Samsung’s mobile UI. There were duplicates of all Google apps and the camera was just outright bad for my liking compared to my old Pixel 2 that I had back then. I decided to feel old and go back to Pixel.

Conservatism in mobile tech is what sells

You can see what Apple is doing. They may have the best SoC and video recording but everywhere else they are behind their Android competitors. Still Apple sells their iPhone 7 and 8 models like crazy and they are not slowing down. The iPhone 8 from 2017 is basically an iPhone 6 with a better SoC. Still it sells.

Have you tried the new swiping navigation on either iPhone or Android? It’s awful. You feel like dropping your phone and navigation is way slower than on a traditional three button navigation on Android. Normal people unlike me and probably you, are not interested in new ways to drop your phone which the new home gesture is.

Normal people also don’t want to get a mortgage to buy a phone. That’s another reason why older models sell.

I’m not saying that the new technologies are not needed or the smartphone tech has reached its peak. The expensive new technology always dribbles down to the more affordable devices and at some point every one of us do have a notch and a swiping navigation.

However, at that point the early adopters are using the next generation of foldable phones. The first gen seems to be priced just for the richest of the geeks and with the issues that Samsung and Huawei are having, probably won’t make Google and Apple rush their foldables out.

The smartphone market is going to be very interesting soon. I’ll try to keep this blog updated with my thoughts on the current and future tech. 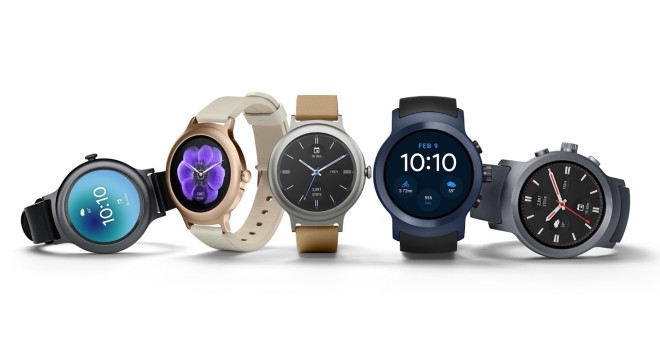 The long awaited Android Wear 2.0 update is finally here. The LG Watch Sport and Style are the first devices to launch with it.

The Android Wear 2.0 update is the first major update since the launch of the OS. It brings many new features and promises to make the most of every minute. Possibly the biggest new feature is the new way to use apps. There is now a Play Store app for the watch and the apps are installed directly to the watch. That means way better app experience for the iPhone users.

The watch faces also get new features. They now bring more information and actions from apps. The Google Fit can now – finally – really track your pace, calories, distance and heart rate. The messaging has been improved drastically as the new Android Wear 2.0 brings keyboard, handwriting, emoji drawing and Smart Reply alongside the voice dictating. Google Assistant is also built into the OS as is Android Pay.

The new LG Watch Sport and Style are the first devices to launch with Android Wear 2.0. The Sport variant is the more high-end one with a larger 1.38″ P-OLED display, 768 MB of RAM, 430 mAh battery and IP68 certification.

The Style has a 1.2″ P-OLED display, 512 MB of RAM, 240 mAh battery and IP67 protection. Both watches are made out of metal and have Snapdragon Wear 2100 SoC, 4 GB of Storage and a bunch of sensors. Although, the Style doesn’t get the heart rate sensor.

The Android Wear 2.0 will be available for the supported watches in the coming weeks. 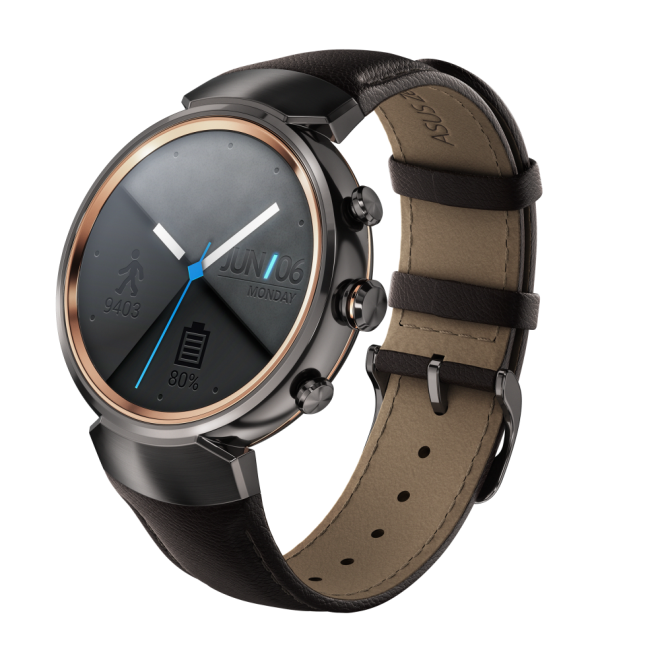 Asus has released their new ZenWatch 3 at IFA 2016. The watch continues where its predecessor left.

Priced at 229€, the Asus ZenWatch 3 is one of the most interesting new smartwatches around. Despite its price, the ZenWatch 3 is absolutely beautiful and crafted out of quality materials. The stainless steel body is joined by 2.5D Gorilla Glass on the front. All three color variants – blackish gray, gold and silver – have the gold ring around the display. The watchband is made out of either leather or silicone rubber.

One might think that Asus would have saved on the specs after that design and price tag but no. The 1.39″ round display uses AMOLED technology and 400×400 resolution. The watch is powered by the Snapdragon Wear 2100 SoC which is specially made for wearables and uses 25% less power than the last popular wearable chip, Snapdragon 400. The usual 512 MB RAM and 4 GB storage are still here, and the 340 mAh battery sadly sounds a bit like 2015. However, Asus has included their own fast charger that will top up the battery much faster than usual.

On the software side, the ZenWatch 3 runs the latest Android Wear 2.0 with Asus’s tweaks on top. The watch comes with fitness apps separate to Google’s own and packs a whopping 50+ watch faces out of the box.

The ZenWatch 3 will hit the markets later this year and as mentioned at 229€. The US pricing should be very similar to the euro pricing due to, well, EU-stuff. 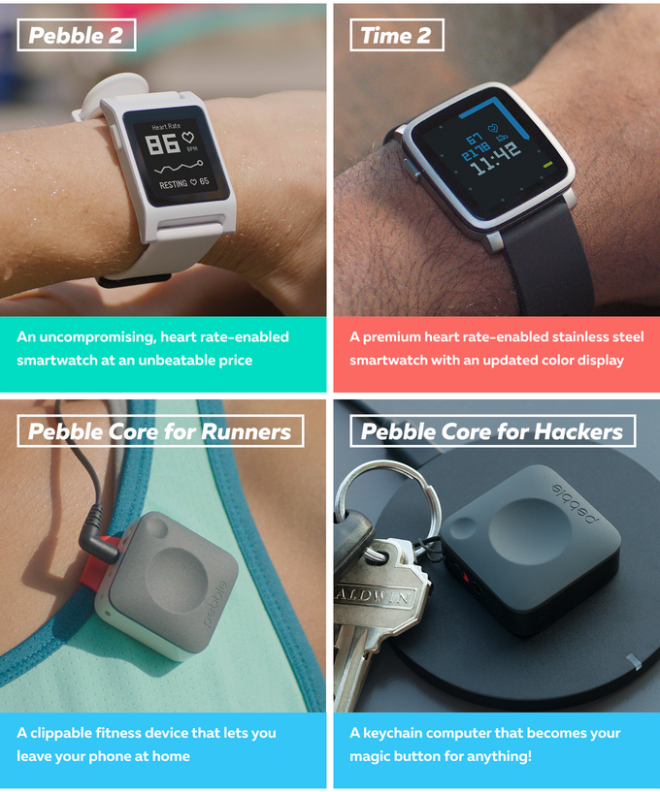 Pebble, the pioneer of smartwatches has released a new crowdfunding campaign for its new Pebble 2, Time 2 and Core devices.

Pebble 2 is a refresh of the original Pebble. It has the black and white e-paper display and awesome battery life from its predecessor but adds more intelligent fitness and sleep tracking.

The Pebble Time 2 gets a bit bigger update as the color e-paper display is much larger than in the previous model making the device look much more modern than the predecessor and its huge bezels.

The both models are water resistant to 30 meters of submersion. The Pebble 2 has a 7 day battery life and the Time 2 lifts it up to 10 days.

The Pebble Core is a new iPod Shuffle. It runs Android, doesn’t have a display and can stream music from Spotify. The Core for hackers is a minicomputer that can be programmed to do stuff with its own SDK. Both Core models are independent and don’t need a phone to work.

Retail prices are $99 for the Core, $129 for Pebble 2 and $199 for the Time 2. There are still a lot of early bird prices available even though the campaign has gathered its goal of one million dollars over five times already while writing this. 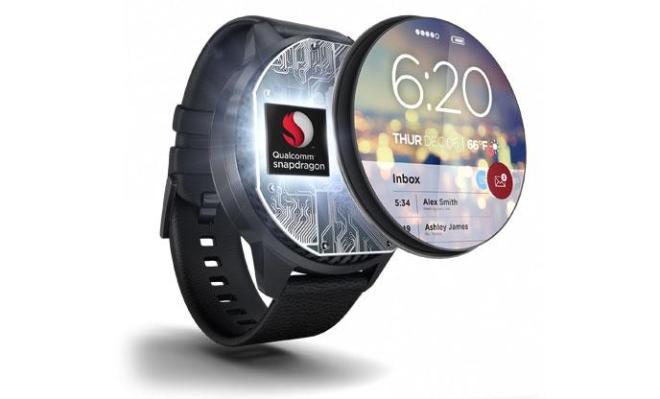 Qualcomm has revealed a bunch of new chips, one of which is specially made for wearables.

The Snapdragon Wear 2100 has a 800MHz or 1.2GHz quad core CPU and an Adreno 304 GPU. The CPU cores use the oldish ARM Cortex A7 architecture which however is the most relevant one because of its efficiency. The Wear 2100 supports 400MHz LPDDR3 RAM and has integrated X5 cellular modem.

The 625 is going to bring much more power to the new premium mid-range category of smartphones. The 400 series chips are for the low-end devices.

Google has revealed some new Android Wear features. The update will be available soon.

Google’s official Android blog has revealed new Android Wear features. The update will finally allow voice calls directly from the watch if it has a speaker like the Huawei Watch or Asus ZenWatch 2.

Other new features are new wrist gestures and support for sending messages in 3rd party messaging apps with just voice. The update will be available soon, no exact date announced. 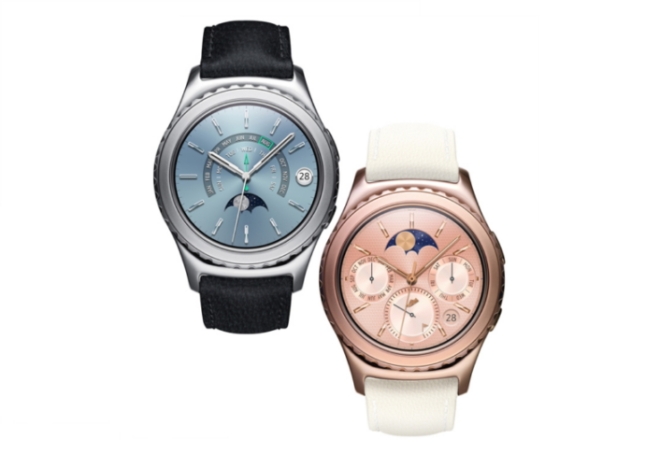 Samsung has updated the Gear S2 in few ways. The CES 2016 is on and we are following.

Samsung’s Gear S2 is one of the best smartwatches on the market right now and now it got even better. Samsung has promised to bring iOS support for the smartwatch ‘later this year’. The other major update is support for Samsung Pay. There’s no exact date for either but Samsung is working on them.

Also there will be two new color options available for the Gear S2 Classic, one with platinum and another with rose gold. Specifications remain unchanged. Pricing and exact dates are still unknown. 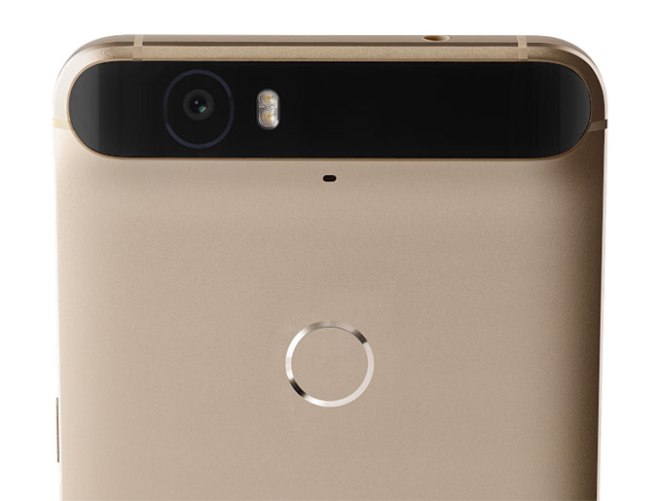 Huawei is one of the first to introduce their new products at CES 2016. First, some new designs.

Huawei built Nexus 6P was rumored to have a gold color option and now it’s true. The gold option will be available soon in the US for the same price as the other colors, $449 for 32GB and $499 for 64GB. 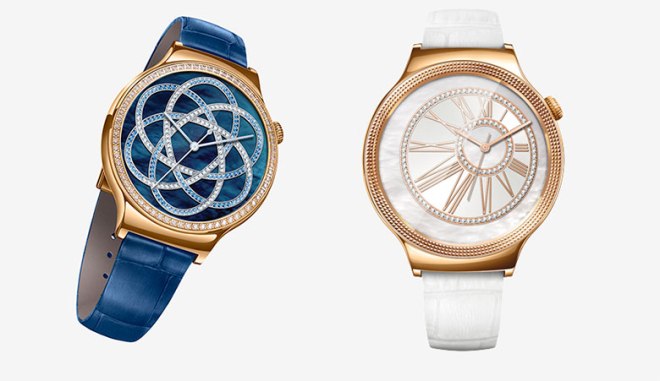 Huawei also updated the Huawei Watch that now has a ladies option. The new version is called the Watch Elegant. It has a narrower watch band, gold plated body and textured bezels. The second new option is called the Watch Jewel and it adds 68 Swarovski crystals to the bezels for extra bling. There’s no information about pricing yet.

Source: CES coverage around the internet 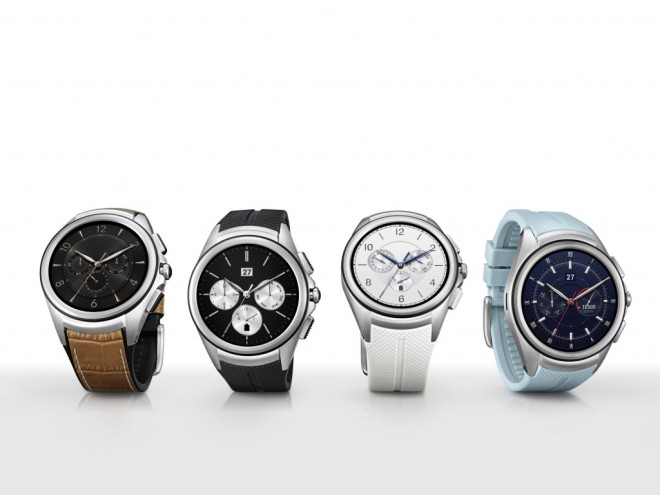 The 2nd gen Watch Urbane was supposed to be the first LTE Android Wear smartwatch. Now LG has pulled the device just before the launch due to a complex hardware problem.

There’s no more detailed information about the issue and the device is pulled indefinetly. It’s unsure if the device will ever launch as LG hasn’t confirmed anything just yet.