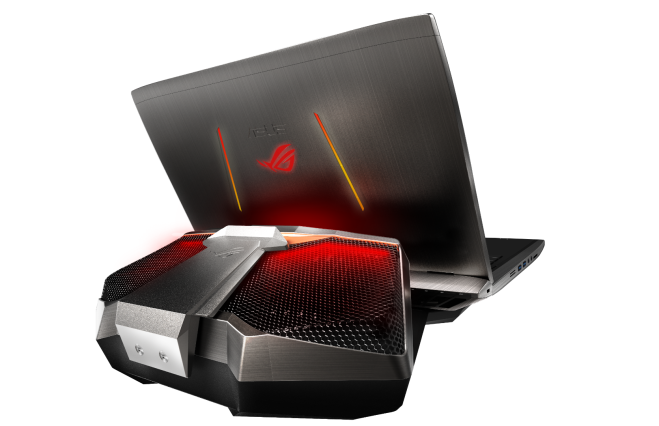 Asus has revealed probably the world’s first water-cooled laptop. The ROG GX700 has an external radiator module and packs some hugely powerful hardware.

Asus has introduced a water-cooled laptop or portable computer. The GX700 has a 17″ 4K display, Intel Core i7-6820HK and an NVidia GeForce GTX 990M. The specifications are revealed by Hexus that has been able to use the computer at IFA 2015.

The GTX 990M is still unreleased GPU but the Windows 10 graphics card info page shows that the GX700 has 2048 CUDA cores instead of 1536 of the most powerful mobile NVidia GPU, the GTX 980M has.

The impressive specs don’t stop there. The CPU is very powerful overclockable 45 watt Skylake i7-6820HK and with the water-cooling it can reach 3.6GHz turbo speeds. The GX700 also packs 64GB of RAM and a pixel packed 17″ 4K display.

The water cooling needs an external radiator module to work but the laptop can be used without it with lower clock speeds. The module has quick adapters to connect the laptop to water cooling. Not much is official because the Asus press release just confirms Skylake CPU, GeForce GPU and the water cooling.

One thought on “Asus GX700 is a Water-cooled Laptop”