Huawei has introduced a couple of mobile devices at their event at IFA 2015. Huawei is the first to bring pressure sensitive display to a smartphone.

Huawei just launched the Honor 7 in various markets and they are bringing a few new devices. The G8 is an upper mid-range smartphone decent specifications. It was first introduced in June but Huawei brought it to IFA.

The G8 packs a Snapdragon 615 SoC, 3GB of RAM, 32GB of storage, 3000mAh battery and a back mounted fingerprint scanner. The G8 is focused on camera capabilities so it packs a great 5.5″ 1080p display, 13-megapixel rear camera and a 5MP front facer. The primary camera has excellent low-light capabilities compared to its price range, the G8 starts at around $350 for the cheaper 2/16GB model. The exact pricing and availability is unknown.

The Huawei Mate S is a high-end smartphone with a 5.5″ 1080p display, aluminium design and a curved back that shrinks the thickness down to 2.65mm at the edges. The Mate S uses Huawei’s own 64-bit octa-core Kirin 935 chip and has 3GB of RAM and 32, 64 or 128GB or storage. It also has a fingerprint scanner on the back.

The biggest thing in the Mate S is the Force Touch like pressure sensitive screen. It’ll be available only with the 128GB model but it surely beats Apple to have the Force Touch.

Cameras are 13 and 8-megapixel and the device is nanocoded against water but it doesn’t have IP certification. The battery is 2700mAh and pricing starts at 649€ for the 32GB model. 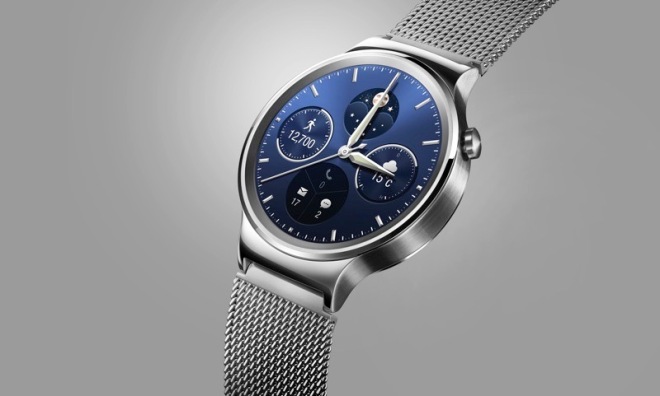 Huawei also re-introduced the Huawei Watch that was already shown at MWC last spring. The Watch now has its final components and design as the MWC model was a prototype. It has a 1.4″ 400 x 400p AMOLED display, Snapdragon 400 SoC, 512MB of RAM and 4GB of storage.

The Huawei Watch is very similar to the Moto 360 but the pricing starts at $349, $50 higher than the 2nd Gen Moto 360. The hardware button placement is exactly the same at the two o’clock position but the display doesn’t have the flat tire the Moto 360 has. That of course means that the bezels are larger.